The archipelago is located approx. 300 kilometers beyond the Arctic Circle and is often called "Norway in a nutshell". The steep slopes of the mountains rise straight from the sea and can even reach 1200 m n.p.m., and the jagged line of peaks looks more like a child's drawing than a real landscape. Most tourists visit the islands in summer, but it's off-season that the best way to get to know the true face of the islands. For over a thousand years in the period from January to April u shores of Lofoten fishing for spawning cod is taking place.

This is the only place in the world, where the appropriate climate enables the traditional drying of fish - on special wooden structures. During this time, all inhabitants live by fishing, you can see cutters everywhere at sea, and in pubs you can hear almost only fishing stories. Even winter storms and a polar night lasting almost a month are not able to discourage true adventurers, especially when the sky is lit by a magnificent aurora.

By the way, it would be necessary to destroy the far myth, arctic and cold north. Climate, what prevails on the archipelago, it does not differ much from that on our Polish coast. The summers are not hot, and the cooler breeze from the north is pleasantly refreshing during mountain tours or excursions at sea. In winter, temperatures rarely drop below freezing. This is due to the warm current, Golf stromal, which flows around the entire Norwegian coast as far as distant Spitzbergen. The beaches are a surprising element of the landscape, which they broadcast Lofotom somewhat Mediterranean appearance. The sea temperature does not exceed in summer 10-13 degrees, but the turquoise and crystal clear water seems to invite you to swim.
Visitors are constantly accompanied by the scream of seagulls. Cormorants are abundant here, maskonury, guillemots and plungers. The king of birds is the white-tailed eagle, hunting mainly for fish. Sheep are other representatives of the Lofoten fauna, who value freedom and freely wander the entire archipelago. The wool and the meat of these sheep, the so-called. Lofotlam, are among the best in terms of quality in the whole of Scandinavia.

Accommodation can be found in picturesque villages, in traditional wooden fishermen's huts built on stilts, known as rorbuer. They were once used to accommodate fishermen from all over Norway during the largest annual cod catch in the world. Most of the huts have been thoroughly restored and adapted to the needs of tourists from all over the world visiting Lofoten. The authenticity and interior design reminds of their original purpose. Norwegian cuisine is characterized by an abundance of fish, prepared in every way. Local, cozy restaurants serve dishes prepared from many species of fish, e.g.. cod, saithe, streak catchers, crimson, halibut and haddock. The delicatessen is dried cod (stokfisz), fried cod tongs and seafood: prawns, king crabs, clams, as well as whale meat. Spawning cod come in in winter, distinguished by huge weight and great taste. Only at this time of the year you can try the so-called. mill, that is, a dish prepared from fresh cod meat, caviar and liver. 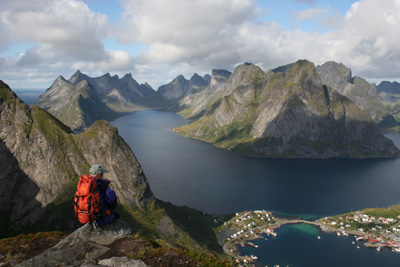 The most interesting tourist attractions of the islands are the sea excursion and the hike to the cave in Refsvika. The cruise takes you along the wildest, the uninhabited part of the island of Moskenes towards its southern end and exceeds the one described by many travelers, including Jules Verne, one of the most dangerous sea currents and eddies in the world - Moskstraumen.
Trek to Refsvikhula Cave, about depth 115 m and height 50 m, hidden on the outside of the Lofoten, is an unforgettable experience. They are mysterious, red paintings from before 3000 years, depicting human figures. Another very popular attraction is sailing out with a skipper on a traditional fishing boat for the largest cod. While fishing, you can hear more than one chilling story about difficult expeditions during storms, and tons of legends and superstitions, in which almost all fishermen believe to this day. A special attraction in the Lofoten Islands is the orca safari. Huge shoals of herring enter the Vestfjord each fall. Their presence is the reason, for which hundreds of killer whales stay in the waters of the fjord between October and January. It is a great treat for them, and a great spectacle for people, which every year attracts numerous admirers of these fascinating mammals. Diving is also popular, allowing for close intercourse with orcs.
A trip through the entire Lofoten Islands will allow you to get to know the islands better. Old fishing boats can be seen at the Norwegian Fishing Village Museum in Å, fishing equipment and Norway's oldest tranning shop. The Kabelvåg Aquarium is also worth visiting, showcasing all forms of life in the arctic waters of northern Norway, as well as art galleries and local museums, depicting the rich history and culture of the Lofoten.

The highlight is the multimedia journey into the times of the Vikings. In the Viking Museum you can see with your own eyes, what their life was like. A special offer has been created for the groups with a Viking ship cruise and a meal, during which delicious food is tasted, mainly composed of meat dishes, prepared as centuries ago and served by waiters dressed in Viking costumes. Lofoten, especially the western part of the archipelago, is a paradise for mountain hikers. You can go individually or with a local guide on several-hour-long expeditions to the peaks, from which there is a breathtaking view of the sea, mountains, skerries and fishing villages.
At the end 2006 year, on the initiative of National Geographic, gathered 522 experts, who assessed on the basis of many criteria 111 islands and archipelagos around the world. Lofoten was ranked third. This year also the Norwegians gave the Lofoten their prize, recognizing the islands as the country's most dream holiday destination.

You can easily fly to Oslo with SAS airlines, Norwegian Air or Wizz Air. The first two lines offer tickets from Poland via Oslo to the airport in Bodø or Evenes near Narvik. Then it is possible to get to Lofoten by ferry, commute by bus or use the local Widerøe airline. With favorable winds, the journey only takes 6-8 hours. The cost of the entire round trip is from 1200 PLN.