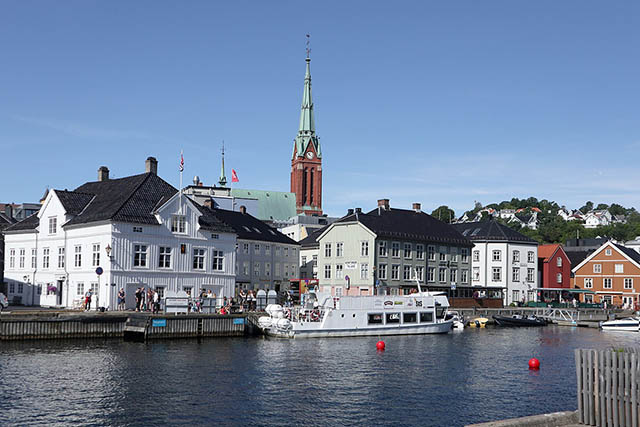 Arendal, the administrative capital of Aust-Agder (Eastern Agder), it is situated on the steep slopes surrounding the harbor, better known as Pollen. People wishing to go swimming or to indulge in other seaside activities, they should go to the island of Merdø (access by ferry), Tromøy lub Hisøy (access by bus).

The only laundry in town is Vaskebaren (37022542). This laundry room at the port is not self-service, so it is worth asking for payment in advance, to avoid unpleasant surprises when picking up the laundry. The nearest self-service launderette is next to the Tvedestrand tourist information office (12 km east by road 410), and washing costs there 20 nkr.

After a few minutes walk south of the bus station, you come to the old harbor district of Tyholmen, where there are wooden buildings from the 19th century, with clear neoclassical influences, rococo and baroque. In year 1992 the city received the 'Europa Nostra” for a perfect renovation. As expected, there are many talented people in this district (and often associated with the sea) artists and craftsmen. Initially, the district of Tyholmen was separated from the mainland by a canal, which connected Pollen to Kittelsbukt (an industrial port located west of the city center). When the sailing era has passed, this channel has been filled up. It is currently being rebuilt and soon Tyholmen will be an island again.

Certainly, many people will be interested in the unusual town hall (town hall), which is actually coming from the year 1815 home of the shipowner. At the end of the 19th century. the original dome decorated with stars was replaced by a flat ceiling, but fortunately, the original staircase has also been preserved. On the first floor, there are portraits of the Norwegian royal family from the 20th century. and former mayors of Arendal.

The beginnings of the Aust-Agder Museum were quite remarkable. W 1832 r. the city asked the seamen from him, that they would bring a variety of interesting items from all over the world. And it is in the district museum that you can see the result of these searches. In addition, there are also exhibits related to the construction of ships and the trade in wood and other goods, and also a nice collection of folk art, agricultural tools and sailing implements. The museum is open from 20 VI to 20 VIII: from 10.00 do 17.00 At weekdays, from 9.00 do 13.00 on Saturdays and from 12.00 do 15.00 on Sunday. 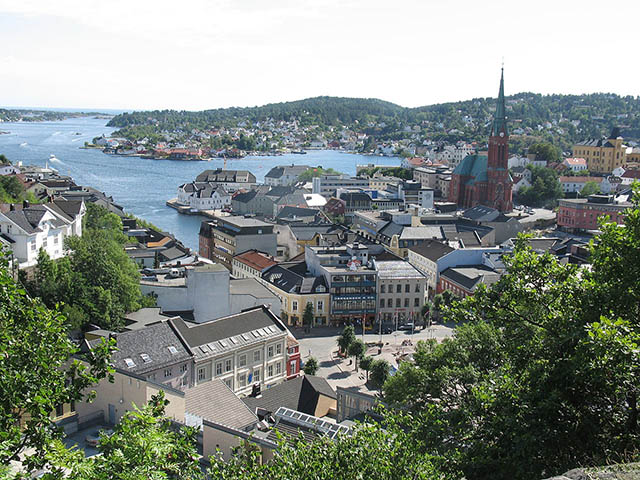 Counting 260 The island of Merdø has been inhabited since the 16th century. All kinds of vegetables that have been brought to the island as ballast of ancient ships grow here. In the historic captain's residence z 1736 r. it houses the Merdøgård Museum, adorned with period furniture (37022422). fest it is open every day from 12.00 do 16.30 in the period from 23 VI to 15 VIII. There is a possibility of guided tours every hour.

Two tall lighthouses stand on the islets of Stora and Lille Torungene, which from 1844 r. marked the entrance to the port of Arendal. You can see them from the shores of the islands of Hisøy and Tromøy.

Some of the popular beaches on Hisøy are: Stølsvigen, Tangen in Vrageviga. Unfortunately, the bus does not reach them (the line #336 only commutes to Sandvigen) and you can only get there by bike or car. Favorite places for swimming in the sea are in Tromøy, and these are Spornes and Hove. The closest to Spornes is from the bus stop #334, although you still have to walk a few kilometers. It is also possible to take your bike on the M / S Skilsøy ferry (37005544), which runs frequently between Arendal and the western tip of Tromøy (6 min, 12 nkr, after midnight on weekends 35 nkr). Kolbjørnsvik na Hisøy can be reached from Arendal (6 min, 10 nkr) frequently running M / S Kolbjørn III (37005544), and on Hove there is the same ferry as on Merdø.