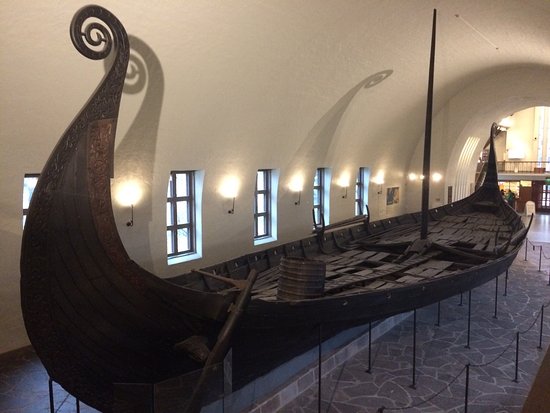 The Vikings believed, that death is not the end of life, but only a change of its form and that with death one does not lose the social position gained on Earth. So it was a norm to bury the dead with items that belonged to them during their lifetime, which in the afterlife were to be a determinant of their status. At the turn of the 19th and 20th centuries,. The Norwegians discovered three richly equipped tombs in the south of the country, the so-called. kurhany, which made it possible to bring much closer to the material and spiritual culture of the early medieval times, Scandinavian warriors.

Viking Ship Museum (norw. The Viking Ship House) is located at ul. Huk Avenue, in the eastern part of the Bygdøy peninsula. Officially, the museum is a branch of the Museum of the History of Culture, belonging to the University of Oslo. The museum was opened in 1926 r., with the commissioning of the exhibition hall for boats from Oseberg. Over the next three decades, two more halls were added to the original structure, in which boats from Tune and Gokstad were placed (before that, all ships were kept in makeshift ones, shelters belonging to the University).

All three boats have been found in graves in southern Norway (Oseberg is lying 6 km north of Tonsberg, Tune ok. 4 km knows west of Sarpsborg, a Gokstad ok. 5 km east of Sandefjord). Earliest, because already in 1867 r., the ship from Tune was discovered, next, w 1880 r., there was the discovery of the ship from Gokstad and finally the last, w 1904 r., the ship from Oseberg was unearthed. Of the three boats, the oldest one is the one from Oseberg (its creation is dated at approx. 820 r.), next comes the boat from Gokstad (probably built approx. 890 r.), the youngest is the Tune boat (built approx. 900 r.). In terms of size, the largest is the boat from Gokstad, who has 25 m in length and 5 m wide, second is the boat from Oseberg - long na 22 m and wide at 5 m and finally the smallest (though slightly) there is a boat from Tune, who has 22 m in length and 4,35 m wide. Along with the boats in the barrows, many were also discovered, belonging to the dead, objects of everyday use and objects of religious worship, which are also exhibited today in the museum.