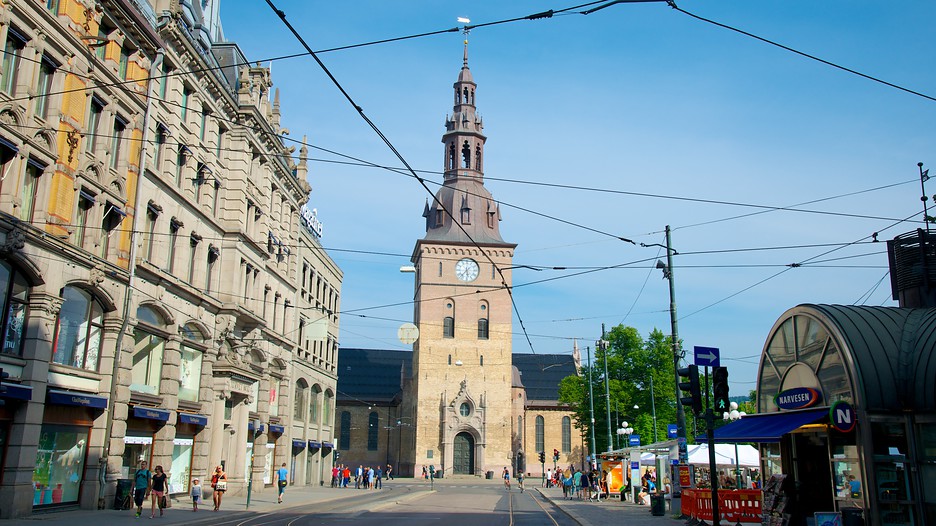 The Oslo Cathedral is not only the most important religious building in the city, but also the official temple of the Norwegian Royal Family. This is where the coronations take place, weddings and others, important celebrations, with the participation of the monarch or his family. W 2001 r. Prince Haakon Magnus Glücksburg took a wedding in the cathedral.

Oslo Cathedral (norw. Oslo Cathedral) rises on Stortorvet Square, right next to Karl Johans gate, that is the main representative avenue of Oslo. The cathedral is the city's main temple and is under the care of the state church of Norway (the head of this Protestant church is the King of Norway). The present building, however, is only the third cathedral in Oslo, and it was erected at the end of the 17th century. The first cathedral was built by King Sigurd I the Crusader (in the first half. XII w.), but this temple was situated approx. 1,5 km east of today's center, in the Gamle district of Oslo (Old Oslo). Sigurd's Cathedral was used by the Ottomans to 1624 r., that is, until a huge fire breaks out, which almost completely consumed the medieval city. The cathedral was quickly rebuilt, but also changed its location. This was due to the fact that the center of modern Oslo was moved to the vicinity of the Akershus Fortress (the principal of the city reconstruction, król Christian IV Oldenburg, for he noticed, that the city is situated in the vicinity of the fortress, between Pipervika and Bispevika bays, will be better protected). The second cathedral, however, did not last long, because already at the beginning. years 90 - those in the 17th century. a fire consumed her.

The current building, in the style of the Dutch baroque, was erected in the years 1694 – 1697 by Jørgen Wiggers. In half. XIX w. the interior of the temple was given a neo-gothic style, but as a result of a renovation carried out in the years 40 - those of the last century, its original baroque style was restored (the renovation was to add splendor to the celebrations 900 - the thirtieth anniversary of the founding of Oslo). When visiting the cathedral, it is worth paying attention to several of its elements. Looking at the temple from the outside, the massive tower obviously catches the eye, based on a square plan and topped with a magnificent cupola. There are brown doors in the main portal, made from the beginning. XX w. by Dagfin Werenskiold. On the other hand, inside the cathedral, ceiling paintings by the 20th-century artist Hugo Lous Mohr and stained glass made by Emanuel Vigeland are beautifully presented..