In the competition for the most original city in Scandinavia, with approx. 60 thousand souls Tromsø would be one of the favorites. It is the dynamic capital of Northern Norway, boasting a wonderful environment and many of the world's top rankings relative to the North Pole. What is this "best"? Here you are, here are a handful of examples. The natives are proud of the fact, that Tromsø is home to the most northerly university in the world. Enjoy, that it is here that you can admire the two most northerly cathedrals: the modernist Ishavskatedralen - Arctic Cathedral and the historic Tromsø Domkirke, made of wood. And that these architectural emotions can be cooled down with Mack beer, brewed in the most "northern" brewery in the world.

At the local stadium, footballers of the first-league club operating closest to the pole run behind the ball. Art lovers will be interested in the most northerly glassworks, runners - organized closest 90 st. N marathon run, and tourists - the most northern cableway installed. Detriment, that Tromsø has recently withdrawn from running for the Winter Olympics of the year 2018. In the event of a win, it would undoubtedly be the closest Olympic Games in the history of the Games to the pole!

This is just the beginning of a long list, which also included a Carmelite convent with sisters from Poland, which is the closest working religious congregation to the Arctic. In the names of many companies, organizations and institutions, the adjective "arctic" is on the agenda. It complements the "northern" image of the city. Let us add - closest to the pole of the larger city of the world…

Because Tromsø is the gateway to the Arctic, nothing unusual, that it became the base of Roald Amundsen - the famous Norwegian polar explorer, the South Pole Conquerors. From here he set off on the icy waters of the North, hence the recruited majority of the crews of his polar expeditions.

Amundsen has two monuments in the city: in the vicinity of the port and at the Polar Museum - Polarmuseet. In the latter, you can learn about the fascinating and in many cases tragic history of the expeditions towards both poles. 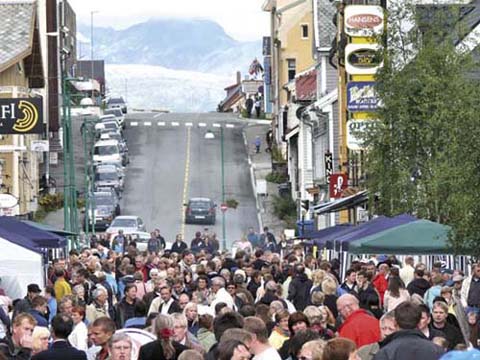 A stroll through the city center

Tromsø began to develop only in the 19th century. Initially on the small island of Tromsøya, over time also on neighboring shores. Today, they are connected to the nearby island of Kvaløya and the mainland by two distinctive bridges, enabling the movement of even the largest ships. An underwater tunnel was also drilled just in case, leading to the mainland.

The center of Tromsø is intimate. The heart of the city is the Stortorget market and the Storgata pedestrian street. The shape of the town hall towers over the whole. Adjacent to it is the impressive building of the municipal library. At the square there is also Var Frue Kirke - a Catholic church with 1861 r. The church and the seat of the bishopric - of course the northernmost in the world - were visited by St. 1989 r. John Paul II during his pilgrimage to Norway.

It is not far from here to the Bryggen wharf with its old granaries. The magnificent "passengers" of the famous Hurtigruten line moor nearby, along the fjord coast from Bergen to Kirkenes.

It is worth visiting the Polaria natural center, presenting the fascinating world of arctic nature. Its part is the museum of the ship "Polstjerna" - the participant 33 polar expeditions. And you have to drop by a little black one in one of the numerous cafes or have a mug of Mack beer in the oldest pub in the city, operating right next to the brewery. And it's expensive? Well, The beer produced closest to the Pole has to cost…

Tromsø Musem is located a little further from the center. Its most valuable collection is the relics of the past about the Saami - the ancient hosts of these lands.

A great complement to the walk through the streets of Tromsø will be a cruise on the "Cetacea" around the island of Tromsøya. This is a treat especially for history lovers - the catamaran arrives at the place, where in 1944 r. to the bottom went the German battleship "Tirpitz" - a twin of the famous "Bismarck".

A military museum has opened in Tromsø, presenting, among others. the story of the sinking of this steel giant from the Kriegsmarine by the Allies.

From an albatross perspective

Be sure to visit the Arctic Cathedral - Tromsø's trademark. A modern body built in the year 1965 the temple became the main symbol of the city. Visiting the cathedral should be combined with a trip to the Storsteinen peak towering over Tromsø (421 m n.p.m.). In the season, tourists are transported there by roller coaches. From the top you can admire the fantastic panorama of the island of Tromsøya, traffic in the port, "Tirpitz" sinking site and arctic skyscrapers - the Lyngine Alps. 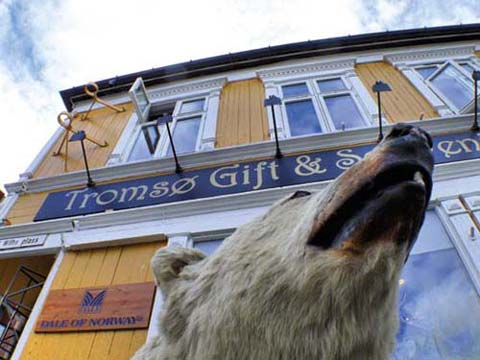 The capital of active recreation

Tromsø is a great starting point for lovers of active holidays. Whale watching cruises are particularly popular. Diving enthusiasts will not complain about the lack of attractions, sea ​​fishing, mountain hiking, glacier climbing and extreme downhill skiing. In winter, the offer is complemented by dog ​​sled rallies, stays in Lappish laavu tents and, of course, Northern Lights observations.

And in June and July, newcomers can enjoy the sun, hanging over the horizon through the round 24 hours. And sunbathe even in the middle of the night. For many of them, it will probably be the tan closest to the Pole…