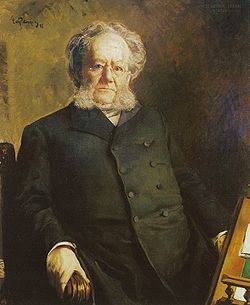 Henryk Johan Ibsen, the most famous Norwegian playwright, was born in Skien in 1828 r. Due to financial problems, his parents struggled with, at the age of fifteen he was forced to earn his living. He wanted to become a doctor, but when he failed his exams in Greek and math he stated, that science is not his destiny. He was attracted to poetry and drama. Violinist of Ole Bull (promoter of Edward Grieg's musical education) he delighted in Ibsen's early poems and his sense of drama, and directed his interests towards theater.

At the beginning of his career, Ibsen worked with the theater in Bergen for six years, and then for five years with the theater in Christiania. So he got to know theater techniques well. Action of his Pretenders to the throne (1863), masterpieces from this period, takes place in 11th-century Norway, and King Håkon IV Håkonsson expresses in this piece a highly outdated view of the unity of the nation.

In years 1864-1891 Ibsen lived and studied in Rome, Dresden and Munich. He openly condemned the pettiness of Norwegian society at that time, which did not prevent him, however, from using the scholarship paid by the Norwegian government. He did not return to Poland until a year 1891, when he had 63 patch. Later work, especially Brand (1866), the hugely popular Peer Gynt (1867), Emperor and Galilean (1873), The pillars of society (1877), provocative Wraiths (1881), Nora. Doll's House (1879), An enemy of the people (1882), Wild duck (1884) and Hedda Gabler (1890) they show the mastery of realistic dialogue. In most of these works, the heroes perform acts, which are hardly heroic (looking, of course, from today's perspective). Thanks to his work, Ibsen was recognized as the father of contemporary Norwegian drama.

Peer Gynt, especially in combination with the music of Edward Grieg, became Ibsen's greatest international success. In this drama, the aging hero returns to Norway after wandering around the world and has to come face to face with his own soul. As he looks back on his life, wasted in traveling and in a fruitless search for truth, layer by layer, he reveals ever deeper layers of his personality, until it turns out, that nothing will be left of him. “Such an indescribably poor soul can return to nothingness in a hazy gray. Beautiful land, do not be angry, that I did not leave any traces, as I walked on your grass. Ty, beautiful sun, you cast your glorious light on the empty house. There was no one in it, who could be happy and warm. They tell me, that the owner was never home”.

In the loudly applauded drama Nora. Ibsen's Doll House has successfully laid out the principles of critical realism and the experience of the individual in opposition to the majority. His heroine, Nora, he puts it in these words: "I'll have to find out, whether I am right or the society”. This problem is loud again nowadays and Nora has become a symbolic figure for women who sacrifice their family life in the name of the principles of equality and liberation..

In the last, partly autobiographical play. When we rise from the dead, Ibsen describes the life of an alienated artist-sculptor, Professor Rubek, who returns to Norway at the end of his life. However, he does not find happiness, because he had betrayed the only woman, which he loved, and his youth for the sake of misunderstood idealism.

At the end Ibsen's life summed up his philosophy, by writing to a friend in Germany: Who wants to understand me, must know Norway. Gorgeous, but the harsh nature of this country in the north makes it, that people close in on themselves. This is why they analyze themselves, they are serious, they reflect and doubt – and they often lose faith. And then the long ones come, dark winters, the houses are surrounded by a thick fog – and, how they miss the sun!”

After a heart attack in 1901 r. Ibsen was partially paralyzed and died five years later 23 May 1906 year.