A few years before his death, Edward Munch bequeathed almost all of his works to the will of Oslo - the city of his childhood and youth.. Half of them were in years 60 - those of the 20th century. at the Munch Museum - the most famous museum in the capital of Norway today.

Muncha Museum (norw. Munch – musset) is located at ul. Tøyengata, in Old Oslo (that is, the Old Town). Open in 1963 r. museum building (designed by architects Einar Myklebust and Gunnar Fougner) seems to be sandwiched between the vast green spaces - the University Botanical Garden Tøyenhagen and the park Tøyenparken. The very opening of the museum building was quite late, because almost 20 years after the artist's death, but it also coincided with the celebration 100 - his birthday anniversary. Today, the museum collects more than half of all, located in Oslo, artist's works. There are over a thousand paintings here, ok. 4,5 thousand. drawings, 18 thousand. graphic (in which Munch has specialized), as well as numerous woodcuts, akwaforty, lithographs, suchoryty, lithographic stones and, finally, woodcut blocks. An interesting fact is, that Edward Much decided to leave most of his works to the capital of Norway in just a few days, and this happened as a result of the bombing of Oslo in April 1940 r. by Luftwaffe forces. Apparently, Munch's will fit on one sheet of paper! 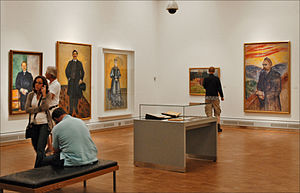 A visit to the Munch Museum is not only a great artistic experience, but also a journey into the depths of the human psyche - meeting with human fears, fear, or the loneliness that engulfs him at every step. Experienced by the life of Munch (his mother and sister both died of tuberculosis, and the artist himself struggled with nervous disorders throughout his life), he often took up the themes of death in his work, fear and abandonment. However, you have to remember, that the emotional states presented by Munch were quite common in Norwegian society at the turn of the 19th and 20th centuries. At that time, the national consciousness was just awakening in the Norwegians (from the beginning. XVI to early. XIX w. Norway was bound by the union with Denmark, and throughout the 19th century. union with Sweden), and the Norwegians were torn by feelings of fear and uncertainty, not only about the political future, but also about one's own cultural identity.

Among the most famous works by Munch in the museum, one should mention, for example, the famous "Scream" (in the museum you can see one of the four versions of "The Scream" made in tempera, on a cardboard box), "Madonna", "Vampire", "Self-portrait with a bottle of wine", "Jealousy", "Kiss" or finally "Death in the sick room".