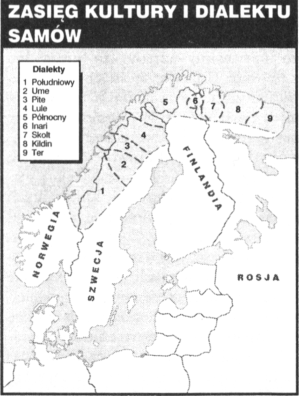 The Sarnów ethnic minority is the most numerous ethnic minority in Norway (nor. samer, formerly called the Sami), in number 40 000 – 45 000 people. This one is cold-resistant, once a wandering people for centuries inhabited northern Scandinavia and northwest Russia. The basis of the Sami's existence was reindeer breeding. Currently, these people count together 70 000 representatives and continues to be a minority in four countries – Norway, Sweden, Finland and Russia.

In Norway, the Sarnov live mainly in the Finnmark district in the Far North. Their groups also live in Nordland, Trandelag in Hedmark. They define their territory with the name Sapmi, that is, the land of the Sami.

W 1988 r. the government passed a constitutional amendment stating: “The government is responsible for creating the conditions for Sami to preserve and develop the language, culture and traditional way of life”. The amendment also guarantees the creation of an elected Sami parliament (Sameting), which acts as an advisory body, presenting the Sami problems in the national parliament (similar institutions also exist in Sweden and Finland).
Person, who wants to be recognized as a member of the Sami community, must meet three criteria: speak the Sami language as mother tongue, consider yourself a member of this people and live according to the rules of the community or have parents, who meet all these conditions.